Foothills Regional Airport officials are planning some additions to the runway.

The airport authority board is looking to purchase around 40 acres adjacent to the airport property to protect the runway approach, said Brent Brinkley, airport administrator. He said the Federal Aviation Administration wants the airport to have the property to be able to have full control of it.

The FAA would pay 90 percent to 98 percent of the cost of acquiring the property, Brinkley said. The most the airport, or local governments that fund the airport, would have to pay is 10 percent, he said.

Having control of the runway approach means being able to keep trees low and prevent any future development from happening on that property, Brinkley said. The board recently voted to have an environmental study and review appraisal done on the property, which is needed before the airport board makes an offer on the property and is approved by the state and the FAA, Brinkley said.

The airport board also is planning to build a taxiway parallel to the runway that would be around three-quarters of a mile long.

Brinkley said the state has already approved the money for the taxiway, with $10 million (90 percent) from the federal and state governments. The other 10 percent of the cost would come from the four local governments — cities of Morganton and Lenoir and counties of Burke and Caldwell.

Each government entity would be responsible for 2.5 percent, or around $250,000, that would be spread out over about an eight-year period, Brinkley said.

The taxiway was planned for 2023-24 but the state notified airport officials that the date has been moved up to 2018-19, he said. 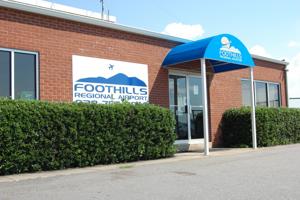